Thankyou to those who have paid their subscriotions for the 2021 year. For those who have put to one side and have forgotten where the notice is, refer to Advocate 21/1.

Our membership remains  a key to our effectiveness. Currently we have asked Waikato Regional Council and DOC fishery to act on the sign on the stopbank on the river side of Tongariro Lodge. It is an interesting situation in that the stopbankhalf way along does sit on Tongariro Lodge land. The Maori Land Amendment and Maori Land Claims Adjustment Act 1926 is important. A belief held by many is that a 20 metre access strip on both sides of the river exists from the Delta to the Fence Pool. That is the case where the strip is on Maori Land but is not the case if the land was freehold prior to 1926. The farm at the end of Grace Road is freehold therefore there is no right of access contrary to what has been the belief. It is the reason that access is not available beside the house at the end of Herekiekie Street and why access is against the fence on the North boundary of the drive to White Water Lodge. We have a solution if we can reach agreement with Land owners.

Adult season licenses sold for the 2020/21 season were 3200 + senior Citizen licenses 1075 and Family Licenses of 2004 , a total of 6279.. Half these licenses will be for boat anglers and the other half will be spread among 4 angling clubs. Our aim is to build our membership to 500 in this year. We are a long way short of this figure and need your support to get new members. What we have today should be what we leave for anglers in the future.

I sat in on the TFAC meeting held 11 February 2021′ It was the first meeting with  Julian Proctor as Chairperson.

DOC fishery must meet their costs from license sales. thus there is much about license sales and if their targets are being met. It appears that they are.

The management of Lake Otamangakau is interesting. The Lake has a temperature logger and there is a point when the lake warms to a dangerous level for trout. It adds severe stress to fish caught and when released by those who use catch and release many fish are found to die. The evidence of this last summer was the sight of numbers of big dead fish in the lake. An effort is being made to have days when lake temperatures are high, to advise there is no fishing. Signs and Internet communication would be used to advise anglers..

It takes time for offenders to be dealt with. In general offenders can receive an infringement fine or diversion, or a letter of warning or in the worst situations court,  appearance.

When purchasing an annual fishing license by Internet you then receive Taupo Fishery Focus as an Internet Newsletter..

Target Fishery Focus replaced Target Taupo. It has been well received for its informative and interesting reports.

The Waipa trap report confirms the excellent fishing that we had last year.

Pest fish are being monitored using new technology. UAV’s (Unmanned Aerial Vehicles) are an instrument being used to detect pest fish. Another new technique is sampling water to detect eDNA of the species reveaed in the water samples. It is great technology.

“High productivity suggests more food for trout, so we can be optimistic that fishing will continue to be good. However trout numbers must be kept in balance with their main food source (smelt) or we risk tipping the system into decline. Harvesting Taupo Trout is key to maintaining a healthy productive fishery.”

Much of these matters are covered in the latest Taupo Fishery Focus #15  received 26.2.2021

Research is occuring in Lake Taupo, Lake Tahoe in the USA and Lake Baikal in Russia,This algae has also been found in small alpine lakes. The algae is thought to have been dormant in the waters for ages but is now emerging. It is non toxic. It beds in to the shallow (2-3 meters) margins and Lake Taupo is showing signs. There is a suspicion at this stage that it originates in places where ground water is making its way into the lake.

The photo of the algae in Lake Baikal showed a thick mat. The photo above is from Whakaipo Bay in Lake Taupo. Not all bays in Lake Taupo have the algal bloom.

My impression is that the previously clear sandy lake bottom would become covered in the algae making it uninviting to swimmers.

It has been a good time fishing on the lake in late summer..  Fish caught from the lake are full of smelt. The Green Bottoms team stated that they were amazed at the quantity of smelt they observed in the dives investigating Green Blue algae. It is significant that a good smelt food source delivers good quality fish. 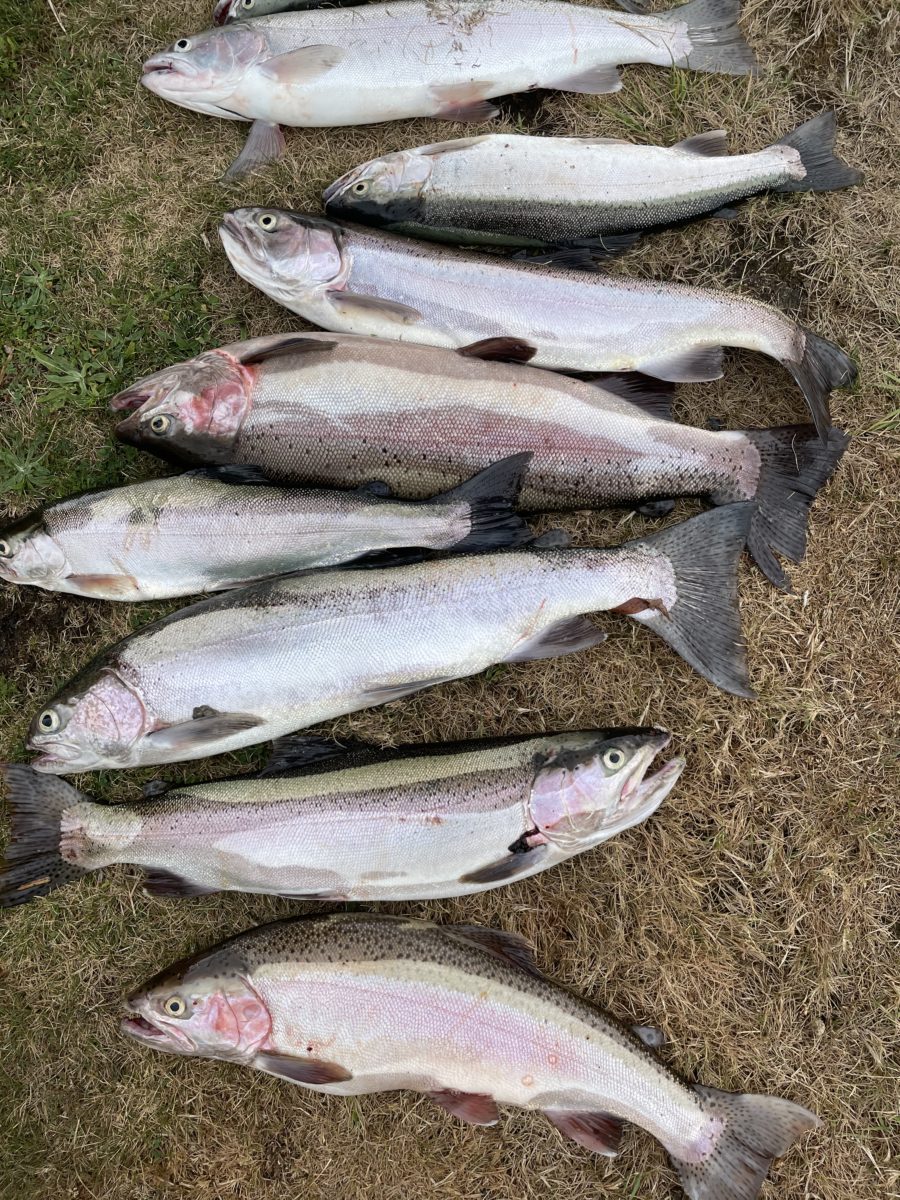 Bill Grace is a local fishing guide recognised in his boat Old Yellow and has been a guide for years.

Richard Kemp and I fished the Delta recently. Launching the boat we talked with Bill Grace. We mentioned the 6.5lb trout Richard had caught on our last trip and the fact that it was full of smelt. Bill’s opinion was that it had been an excellent summer for smelt due to the lake level being held high for a long time.

We talked about great looking fish caught in the river but they had an awful taste. Their stomachs had green phytoplankton. Bill didn’t comment on that but did remark on trout that had an unpleasant smell about them which he said was due to trout eating catfish which took a lot longer for trout to digest.

I have not experienced either but it is something to be aware of.

From the Listener March 13-19.  Article Bolts From The Blue by Paul Gorman

Carbon Fibre rods are particularly good conductors but all rods are susceptible to lightning strike if they create a high point while being held..