At last there are fish in the river, anglers abound.

There have been good fish, and good fishing, for some time now but they are not numerous. The latest fish run arrived on Thursday. Why? We experienced a small flood of 115 m3/sec the result of 25.6mm rainfall on Tuesday afternoon and night. It was sufficient stimulus to bring a run of fish into the river. Late Wednesday the river was at 80m3/sec and dirty and not really fishable.  Thursday was a different story and I tried late Thursday and managed a nice fresh run Jack. A fellow downstream of me caught two nice fish, both of which he returned to the river.

This afternoon I went later and stayed until 5.45pm and had an enjoyable time; lost one and caught one. Both fish landed over the two days were about 3lb and in great condition.

Turangi local, ex Australian miner, Don Faulkner left the river this evening as I arrived carrying 4 fish – a couple I estimate as around 1.8 – 2 kg (4-4.5 lb)

In an earlier Blog I reported from the TFAC meeting that discussions were underway to improve access for the length of Graces Road and also to the Bain Pool. 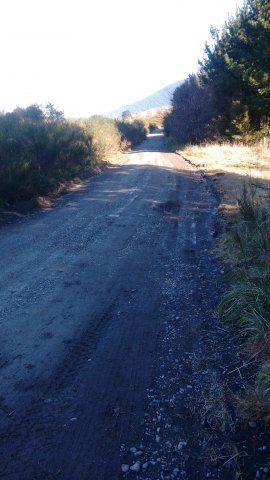 I am pleased to report that the new coating of metal has made a significant improvement to the Bain car park. It is a modest upgrade and weather and significant floods will tell how good it is. I have not checked out the final section of Graces Road.

Over 2 planting half days some 2500 native plants have been planted in the area of the Hydro Pool. Project Tongariro initiated this planting and did an excellent job of preparing the ground.  Plants have been staked and mats placed for weed protection. The Advocates are committed to pay for some of the plants.

Looking South from the path to the Hydro Pool on the second day of planting.

This photo is looking North which was the first day of planting. 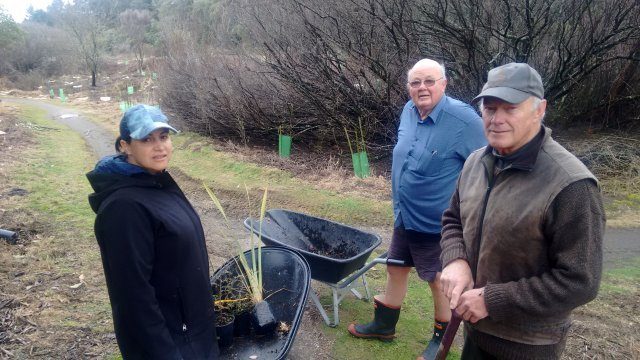 I went walking with my wife’s walking group on the track from the camping ground above the Pillars of Hercules towards Tree Trunk Gorge. The bird life and native vegetation was spectacular. 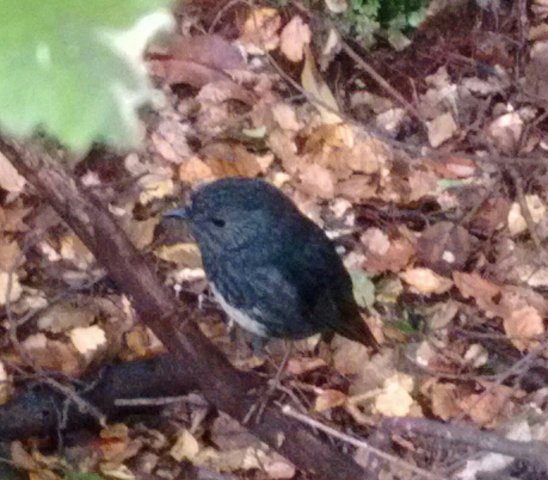 This Robin was so friendly . One can only hope that such wildlife can survive and it is great to read of some of the projects to achieve this.

The Tongariro Catchment is very fortunate in the indigenous vegetation and native birdlife that exists here.

In reading the Taupo Times tonight I was miffed that I knew nothing about World Fishing Day. 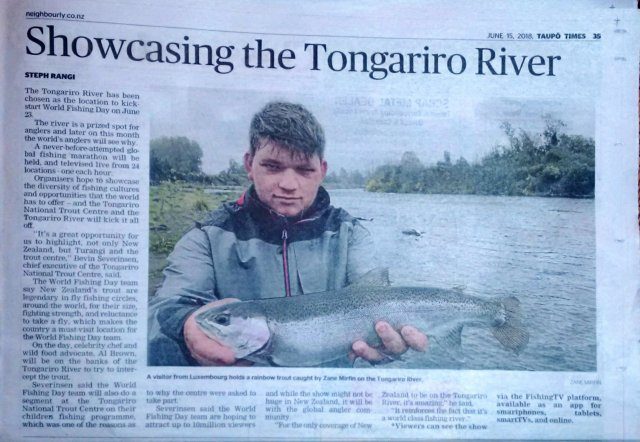 The paper and the World Fishing Day website said that the Tongariro River will feature on the 23rd June, 8 days away. I have not checked details but think it has been organised through the National Trout Centre. It appears that there will be cameras at 24 sites around the world and that the Tongariro River will be the first site shown  and that Al Brown will be here seeking trout to cook. The website (www. World Fishing Day) or check on You Tube. I guess that there will be a lot of filming before the day to be edited into a 1 hour show which the website says will be seen by more than 10 million people world wide. It is good publicity for the Tongariro River. It is good that the fishery has good quality fish again.

Lake Snow This we did not want.

Algae find in Lake Taupo could be ‘disastrous’

A freshwater scientist is warning that the discovery of an algae in Lake Taupo which can create so-called lake snow could be disastrous for the ecosystem and commercial fisheries. Lake snow produces mucus-like slime which hangs and drifts in water and sticks to fishing gear, boat hulls and swimmers. It isn’t a risk to humans or animals but it can get into residential water supples and cause blockages. It’s already present in the Southern Lakes and testing by the Waikato Regional Council indicates it is present in Lake Taupo and Lake Rotoaira. Researcher and expert on the algae, Marc Schallenberg, told RNZ reporter Kate Gudsell it affects a lot of the people who use the Southern Lakes.