Report on WRC Annual Work Plan for the Tongariro River.

20 people were present at the meeting held on Monday, 8th August, 2016 at the Bridge Lodge.

The second part of the meeting presented the  options for work at the Downs Pool. David Bouma of Tonkin and Taylor, when asked what would happen if nothing was done, stated that he didn’t know but  suggested that the main current of the river would break through into Deep Creek.  This would mean that the new main mouth of the Delta would be next to the Tokaanu tailrace. The river downstrean would become ponds and eventually dry up though the whole area would be covered in water in times of floods.

Iwi present did not want this to happen as there is Wahi Tapu that would be affected.

David was questioned as to why there was no mention of dredging the mouth which is blocked with sediment and his reply was that Graham Smart had considered this option and found that as a long term solution it would not be effective. Te Takinga New stated that it was the desire of his grandfather and uncles that this happen and asked that it be tried on a smaller section such as the Hook which has been closed for some years. If effective the main channel could be opened by dredging.

The meeting was aware that remedy involved cost and that the proposals offered varied from $1m. to $7m.

In conclusion this meeting, considering the Downs Pool, put awareness to the public and a further public meeting would be called to consider a community response.

I met with Ngati Turangitukua on Friday 19th August to discuss working together initially on an environmental project. I am hopeful that we can build a closer relationship.

The last two weeks has seen the arrival of Spring. Morning frosts followed by beautiful days make  for very enjoyable fishing. The full moon made nights spectacular. In the Maori calendar now is the time to begin planting in the garden. 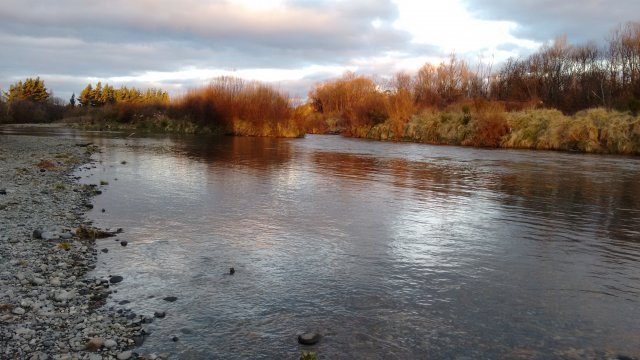 A new report in the Christchurch Press, following some research in the South Island,  states that fish are smaller now in rivers with Didymo. Fish and Game rangers in the same article state that this is not their observation. Still, it emphasises the need to attend to the cleanliness of gear.

A week ago on Friday we had a deluge which resulted in an increased river flow. The fishing following was excellent for both wet line and nymph anglers.

Fish are in good condition but are in an average range of of 48cm and 2.5lbs, or 1.2kg. Anglers often estimate fish to be bigger than they actually are. There is a need to weigh fish to get a good idea of the true weight. A dot of nail polish on the rod is a good way of ensuring fish caught are legal size. Spawning is in full swing and spent fish are  now being caught regularly.  Anglers are encouraged to take the legal sized fish they catch. Many will say that there are too many fish in the Lake Taupo system. Most also think that things are improving. 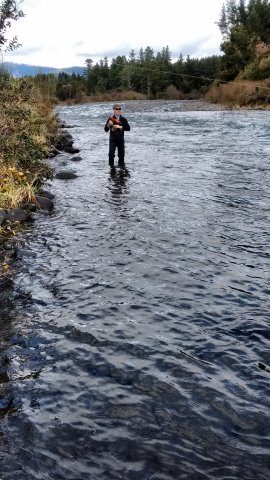 Fishing etiquette gets challenged with more anglers on the river. It is a frustrating experience for anglers when people move in front or an angler does not move downstream when he should.

Overall there have been a lot of happy anglers.