Today has started with the heaviest frost of the season; -6. There are hardy anglers heading to the river accompanied by a moonlit sky before 6.00am. For me that takes the pleasure of catching a fish a stage nearer pain.

I fished the last day of the season and thought that the season had finally started to look up. I caught two Jacks in the Breakfast pool which was very encouraging. My friend caught 1 downstream. Downstream I saw two anglers each with a limit bag leave the Reed Pool. I had fished on Tuesday afternoon, saw 5 anglers and 2 anglers walk away with 3 fish between them. I had 3 opportunities to catch a fish and lost to the fish. That is far better than most days this season. There have been few anglers on the river and even on Thursday we had each pool we went to for ourselves.

The start of Thursday was idyllic. The forecast was for snow on the Desert Road that evening. At 11.00am there was no wind, winter warm (8 degrees) and catching fish was a pleasure.  This was enhanced by 2 Whio flying down stream to the Major Jones Pool for 30 minutes and then fly back towards where they had come from. This was followed shortly after by another Whio which repeated the action of tne first two. I spoke with Dr Nick Bradford at the June meeting of Lakes and Waterways Action Group and Nick an avid photographer and angler told me of his pleasure in fishing the area between the Blue and Boulder Pools accompanied by a Blue Duck and although he caught no fish on his visit that day he got much pleasure from the company he had.

The favoured areas are those where there is some deep water. The new Favourite pool is the new stopbank at the end of Herekiekie street as deep water is found alongside the rocks. 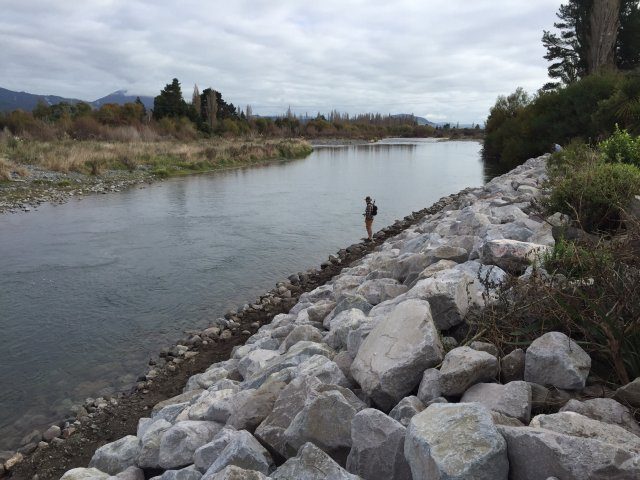 Nymph anglers re using long traces and very heavy bombs to get to the fish at the bottom of the pool. Lure anglers are also having success from the true left . That area is attracting more anglers than the Bridge Pool.

Trout to date are not spectacular in size (not making 3lb). The quality is good. Good colour and good proportions. The week before I had been checked for my License and given the questionnaiire check. I have been fortunate over 40 years to have experienced years with a bag of 8  fish all of them good. So today I remember those days and hope that such times will return. So the questions, The fish themselves, better than the past few years. From the flesh colour there would appear to have been smelt in their diet Their shape is good. The runs are getting later.so one has had to put a lot of time in per fish and I suspect that on Thursday I was luckier than most judging by the comments of those I spoke to.

You probably received this email from DOC fishery if you were a season license holder last season.

Taupo anglers be ready, the new season is approaching!

From 1 July 2016 the new fishing season for Taupo Fishery begins.
The price for an adult season licence (1st of July 2016 through to 30th of June 2017) will remain at $90 per person, which represents great value.

If you’re a keen angler and want your child to enjoy the fishing experience, Child season licences are $12.50 each.

To purchase your next season licence visit online http://www.doc.govt.nz/ (copy into the URL) (Licenses bought from the tackle shops incur additional charges as the transaction is made online in the shop)

Remember to always carry your fishing licence when out on the water.

I sit on the Waikato Regional Council, Taupo zone committee and have received the Tonkin and Taylor report which is a study of the issue of a potential breakout of the river at the Downs Pool. This is on the front page of this website. Anglers views on this are sought. As a Turangi resident and an angler I have two views. As a ratepayer the cost factor is not an exciting prospect. But I also appreciate the value to the community of the Trout fishery. As an Angler I would be disappointed to see reduced flow at the mouth of the Delta if the river were to break through at the Downs pool and enter the lake alongside the Tokaanu Tailrace. Waihi Bay has shallowed and become weed infested over the last 40 years. It could jeopardise the infrastructure at Tokaanu. Deltas are evolving landforms. The current Delta has seen the closure in 40 years of the Blind and the Hook and reduced the flow at the First mouth to a trickle. The main has at least 3 mouths where once it had one. I would like to know your thoughts either through my email secretary@tongariroriver.org.nz or through any of our committee members.

I am optimistic that the new season is the start of the fishing runs in the Tongariro River.

I trust that I do not offend any who have already paid their subscriptions but advise that I will forward the subs form  again or ask that you use the form on our website Membership.