Thank you to all who have paid subs and made donations so promptly. As secretary receiving the mail, both internet and physical it is appreciated. It is timely to also record my appreciation to those who have advised me of change of address, email address. Please regard the email acknowledgement of payment as your receipt.

The AGM is on Saturday morning, 18th April, 10.30am at Tongariro Lodge. We hope that we will see you there.

Genesis Energy advise that on Saturday 18th April from Poutu Intake commencing at 9.00am for 6 hours the target flow will be 30 cubic meters per second. There will be a similar release on Sunday morning but this will affect the upper river from the Rangipo dam to the Poutu Intake. It is worth noting that the current flow is 20.7 cu mecs.

There is a feel and sense of Autumn. Some say we have had a frost or two but my thermometer has not yet recorded a frost which is quite late. The colour of the leaves are changing. People are lighting their fires. Most days are beautiful and on the remainder there has been rain which is necessary. We need a period of prolonged rain and a good flood through the river.  The river needs a good clean out and I reckon a flood of 1000 cu mecs to do the job. Such a flood was last two or three years ago.

A good flood would deal to young weedy plants such as willows and pines. If allowed to get their roots down they establish quickly in the river bed.

The Rip rap repair job on the right bank of the Bridge Pool has been completed. Spot spraying of vegetation in excess of 1.5 meters is being carried out. The proliferate regrowth of Willow on the Island at the Island pool has been brought to the attention of WRC staff.

We now conduct out meetings in private homes which rather restricts our opportunity to advertise the meeting. At our last meeting Simon Stewart spoke of his research. There is an update in the Annual Report. The food chain I find interesting in that it is trout at the top of the chain that we measure the well being of the food chain.

We are told that generally the smelt are near starving as measured by fat content compared with smelt from the Rotorua Lakes. The good news is that this year the smelt are significantly larger than has been the case for some years.  As a consequence lake anglers have been catching some really nice fish.

We are told that the phytoplankton (grass at the base of the food chain) is healthy. It seems to me that it is the zooplankton (microscopic prawn like animals) that are the food for smelt and it seems to me that it is at that level that we have limited knowledge. The question is asked, what does zooplankton look like? I asked Michel Dedual and he has supplied the following photos of Daphnia.sp. A big specimen is less than .5mm and most invisible to the naked eye.

I visualise what is going on in the lake as being like the wilds of Africa with carnivores and herbivores in which the lions, hyenas and jackals eat the grass feeders, the deer and other smaller species.

Anglers are beginning to appear in numbers on the river. There have been keen anglers or knowledgeable anglers fishing from the start of the year and while the fishing has not been easy some have caught good fresh run fish. The fish are gathering at the river mouths ready to make the spawning run. It has a feel of how it used to be with the fishing season starting at Easter but we know from experience that while some fish do run at this time of the year the vast majority wait until September. As already stated anglers on the lake have been catching some good fish but some are in the 1kg mark.

Some aerial photos of the river.

I received these photos of the river from Todd Baldwin. They were taken in late 2013 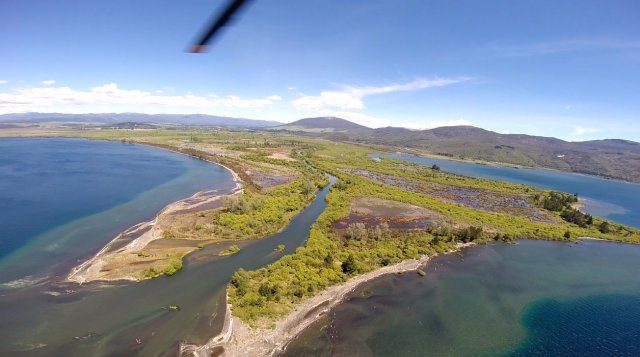 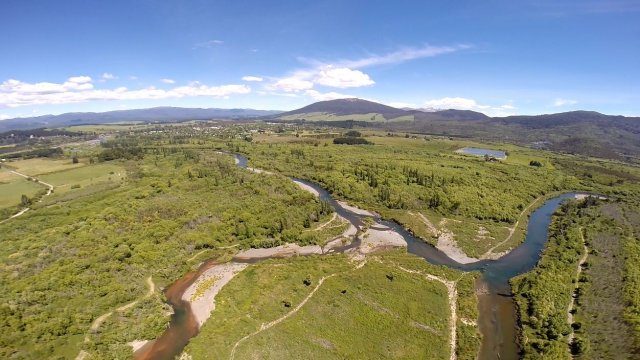 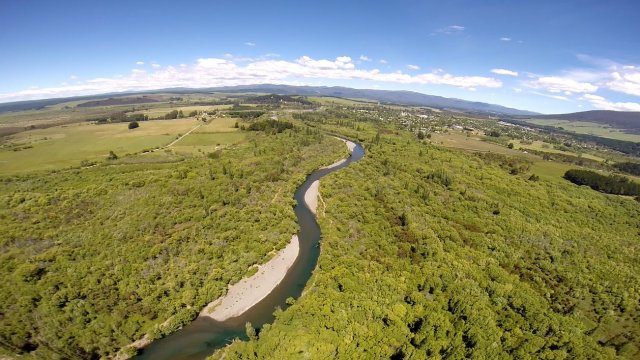 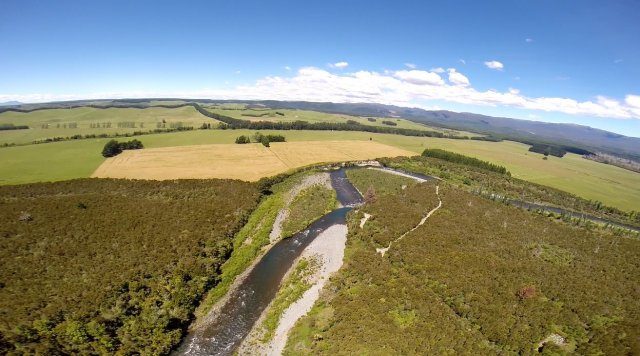 The blackberries have been fruiting for a few weeks now but there should still be fruit around over Easter.