Two things have been evident to me. One is that there have been few fish caught or I have not seen many anglers with fish. The second is the absence of anglers. I have caught fish on enough occasions to keep me trying.

It was a pleasure to meet up with Graeme McIntyre yesterday afternoon. Sharpshooter double Olympian (1972 and 1976) Graeme had pinged a couple of nice fish, the larger being 4lb. He had released another two before heading home.

Graeme was able to report that he was aware of limited success among anglers he had met.

The absence of anglers is shown in the following 4 photos. No one in the Log Pool, the Reed downstream to the Jones Smallman’s, the Major Jones and Breakfast Pools at 4.30pm tonight. There were 3 fishing the Hydro Pool. 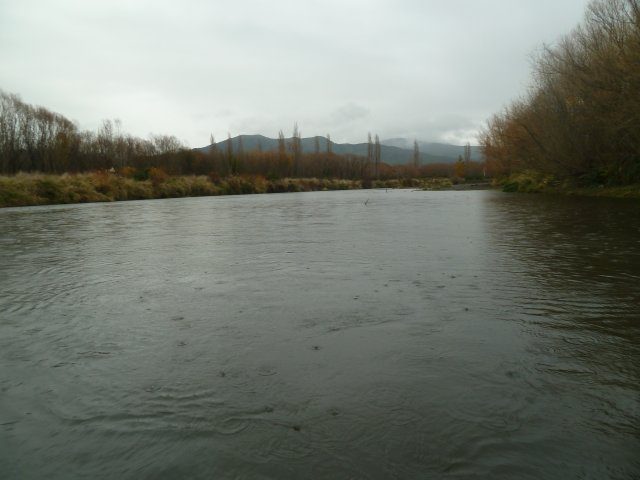 While there have been regular rain warnings from Waikato Regional Council (WRC) we have had only a small amount of rain. I did anticipate a run of fish but am unaware of this happening.

Angler’s tracks have been well prepared and are an easy walk. This is a far cry from the time when access to the Reed Pool from Grace’s road was closed and anglers made a new track from the Bain to the Reed. After strong winds earlier in the year and the track cleared quickly of fallen trees and branches, the track was cleared with scrub bars and looks good. Thanks to those involved.

As in the past, anglers are making their own tracks to favourite spots and with greater use will become well worn.

Planting from Te Aho Road to the Major Jones swing bridge is looking good, particularly the cabbage trees as the following photos show.

The report here was presented to the committee at the meeting following the Annual meeting.

Wilding Pines – June 2014
Further to my last report for the year 2013, DOC have now completed the pines poisoning in the Waikari and Paurini Reserves. This has used up our WRC/EIF grant of $8000. There was a greater number of younger trees in the reserves that were not visible from the air when the survey was carried and which were not anticipated to be present, so it is good to know we were able to get this work done thoroughly. The total cost was actually $10800 and DOC has contributed the balance of $2800.
The next stage is to tackle the juvenile trees on the river flats from the Hydro Pool to the Red Hut/Waddell’s Pools area. DOC still intend to carry out an aerial survey and from this we will be able to put together a cost estimate for us to apply to the WCEET for funding. Dave Lumley has confirmed that they have a strong interest in seeing the wilding pines programme continuing and  his includes the river flats. Their interest is from both an environment and fishery protection point of view, and they will continue to accept the leadership role with regard to gaining permissions from the river bed owners, Ngati Tuwharetoa, and running the contracts. Our role will continue to be one of advocating and fund-raising. All of this is not to suggest that we will let WRC off the hook, and Dave’s view is that we will try to use our joint commitment to ‘embarrass’ them into assuming a greater responsibility for the upper river as river managers.
Just as a reminder, the river flats from the Hydro downstream are the responsibility of WRC from a flood protection point of view and we are starting to gain a bit of influence with them regarding the pines in this section.
Attached below are the contents of a note from Ian McNickle at DOC outlining the contributions the Department has made to the pines programme. This means that the total spent on the pines programme to date is now around $60,000.
John Toogood
26 May 2014

Turangi’s Taupahi Road as it was at probably 1934. (David Holroyd)

The flood of 1958 and the beginning of the The Tongariro Power Development (TPD) changed Turangi from a village to a town. In fact Tokaanu was more significant as a centre than Turangi before then. The flood of 1958 took out the Southern span of the old wooden bridge which lead to its replacement with todays bridge. To that time Taupahi Road was State Highway 1. Taylors Lodge was a key establishment at the beginning of the power project and before.  It was a Post Office, accommodation, restaurant, petrol station. The site to the left of the Lodge was the site of the last sawmill in Turangi and it closed in the 1950’s.

As a Turangi resident I am interested in its development and its past. Barbara Cooper did much research which she recorded in her book The remotest Interior.