The River Pools. Kamahi to the Island Pool

The Kamahi has a beautiful setting with native bush surrounding the pool. The beach is sandy on the upper terrace, but stony on the lower terrace where this photo is taken, and a great spot for a family picnic. It is also a favourite haunt of the Whio (Blue Duck) though I didn’t see any today. The deep water is against the bank opposite the beach and that is where the fish will be once disturbed from the shallows. Allan and Barbara Cooper say that the pool is known after the Kamahi trees growing in this area.

The river then flows through the area once known as the Never Fail and into the Hydro Pool. Able anglers find the pocket water here holds fish.

The Hydro Pool is a large and popular pool. 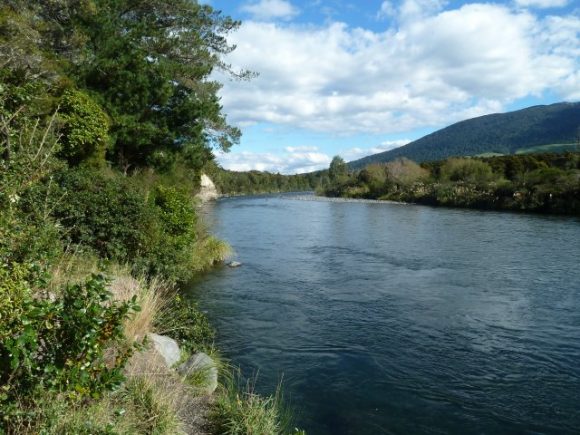 The Hydro pool is a favourite pool for many probably because of its very easy access and the fact that it holds fish, particularly notable for the brown trout. The pool is so named from the 1960’s when the reserve on the left at the end of  Kutai Street was the camp site for Ministry of Works workers responsible for erecting the pylons across the Desert Road. As a consequence it was also known at that time as the Ministry of Works pool.  There is a small beach on the right bank and the pool tends to be fished with a nymph from the end of the beach to the head of the pool and from the end of the beach downstream with a wet line. Infact the fishing is good with either method through the whole pool. In the lower Pool the Mangamawhitwhiti stream flows into the Hydro pool.

This stream is a notable spawning stream for Brown trout and it is illegal to fish this stream. But the deep water around the mouth is a holding pool for fish, browns and rainbows. From the tail of the Hydro pool the current appears to be directed to the left bank where it flows against the rock wall of the stopbank. When the consents were being debated in 2004 one submission claimed that the flow should follow the right bank. This idea has always seemed logical to me and I have wondered why the rocks at the tail of the Hydro pool have been strategically placed to encourage the river to flow against the left bank.

The river then flows into the Breakfast Pool or Nurses Pool as it has also been called as the public Health Nurses house was close.

The next pool is one of the most popular. It is easy to check from the street how many anglers are in the pool. It is a deep pool and holds fish. It has consistently held good numbers of fish over many years. Allan and Barbara Cooper in Pools of the Tongariro  write “Named after Major Rhys Wykem (or Wykam) Jones, who, according to Joe Frost, fished this pool with a 17′ rod whih he had used on the Spey in Scotland. He was about 6’2” in height and weighed about 20 stone. He played his fish with the delicacy of a ship weighing anchor in a hurry. I understand that he originated from India and I should imagine that he was a fine sight on parade, monocle and all. (Joe Frost to H Hickling in Freshwater Admiral.)

It is a long deep pool and from the end of the beach downstream it is more easily fished with a wet line as the backcast is difficult. The photo below looks downstream from the Major Jones pool towards the Island Pool

The pool then moves to the Island Pool. 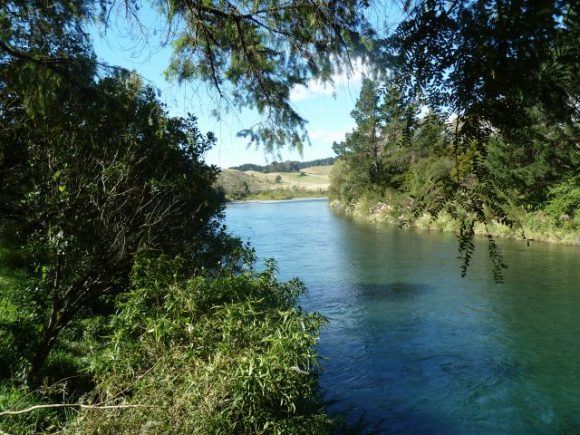 A willow problem is emerging on the island in that the willows as the grow will reduce the flood channel and cause the river level to rise in time of flood. There is a similar problem at Admirals pool. In both cases willows reduce the anglers ability to cast though some will argue that the roll cast will overcome the problem.

The State of The River

I have had a lovely weeks fishing landing a takeable fish each day. The High Pressure system has meant that the sky is blue, winds have been nil to very light and the sun has been warm with the power to burn. I am enjoying wet line fishing without any other anglers around. The fish have been everywhere leaping around. But I have found the fish sucking the tail of my lure causing me to reduce the hook size from a 6 down to a 12. In the end it hasn’t made much difference for me and both size hooks have worked. It’s always the issue of when to strike when you know the fish are at the hook. Certainly not for me when I feel  that first light unmistakable tug. The mouths of the trout are hard at this time of the year. The hook falls out easily when the fish is landed. The fish when opened are good orange red colour. I have still had to put time in between catches.