The following short document is to provide you with up to date information on the bacterial infection that has been found in lamprey/kanakana and trout in Southland and Otago.

Some of you may be in regular contact with MAF on this issue already.  That contact will continue, but for others, this may be the first formal information you have had on this situation.

Please feel free to share this information with any others you feel may have an interest.  I will continue to send further updates as and when new and significant information becomes available. The information in this document is accurate at the time of writing, but bear in mind this is an evolving situation.

MAF received a report from Environment Southland of sick or dead lamprey (Kanakana)  in the Mataura River.

This had been first noticed around 13 September 2011.  On 30 Sept preliminary lab testing of the fish identified the presence of a bacterium, Aeromonas salmonicida.  The Aeromonas bacterium occurs in ‘typical’ and ‘atypical’ strains.  The ‘typical’ strain causes a range of conditions, including skin lesions, in salmon and trout. The ‘atypical’ strain affects a wider range of fish worldwide (including Australia) with similar symptoms.  Neither strain has been previously found in New Zealand, although community information suggests the disease may have been noticed in lamprey populations in earlier years.

Subsequent to the positive identification of the bacterium in the lamprey, infection with A. samonicida has been confirmed in two juvenile rainbow trout from a hatchery on the Taieri River.  MAF is examining two further trout from the hatchery, but our investigations at this stage suggest there is a very low prevalence of the disease at the facility.

We now have a situation where lamprey (from the Mataura, Mokoreta and Waikawa Rivers) and trout from the Taieri River have been confirmed with the bacterium.

Laboratory work continues to identify the particular strain of bacterium at play in this situation.  We are awaiting final confirmation of the positive PCR test results received to date through bacterial culture. This could take some weeks yet. Further analysis is required to determine if the bacterium is typical or atypical.

In the meantime we are keen to continue receiving reports of sick or dead fish to our freephone 0800 80 99 66.

In particular we need further specimens of diseased lamprey to help with full identification.  As well I encourage reports of any illness in other fish species.

Reports of any affected fish can be made through the 24/7 pest and disease hotline – 0800 80 99 66.  The call centre will put you in contact with an investigator who will give you instructions on the best way to collect and preserve samples for analysis.

I wish you all an enjoyable Labour Weekend.  I will be back in touch when there are further developments to report.

Please advise if you wish us to add contacts to the distribution of this report.

Since this report, it was stated yesterday, 2nd November, that the strain is a non virulent strain.

From last weeks update I received the following request.

“I, along with a lot of other people, are very concerned at the huge pile of logs that are in the river between Smallmans and Delatours, they are like small dams, slowing the flow of the river and stopping the flushing out of the sand etc.”  The writer asked that I raise the matter at the Lake Taupo Liaison sub committee of which I am a member. 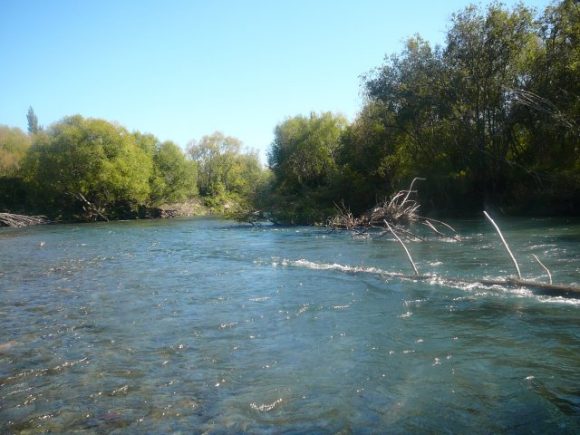 I raised the matter and have been informed that the logs will be removed.  Waikato Regional Council will continue the felling and burning of Willows from The Head of the Reed Pool through to DeLatour’s Pool.  In the process they will remove the offending logs. Machinery is scheduled to be on site next week i.e from the 7th November.

Genesis Energy each year reports to the community on their activities. We will be represented at the meeting on Tuesday of next week. It is an opportunity to learn and question the activities of the Company.

I received a report on Saturday of a sighting of a Blue Duck with 5 chicks in the vicinity of the Major Jones Pool. On Wednesday this week I saw the ducks in the distance against the right bank at the tail of the Breakfast Pool. There had been rain overnight and the river was dirty flowing at 40 cms. Across the river they hugged the vegetation and were difficult to see.

I took this photo across the river but all it shows is how well camouflaged the birds are against the bank. The only way I could pick them out was from their white beaks when they were swimming upstream against the strong current.

The Trout Diaries, A year of fly fishing in New Zealand waters by Derek Grzelewski.

Ewan Sargent reviewed the book in the Dominion Post. Two paragraphs took my attention. The first “What matters in fishing is the whole experience, he says. Being humbled, having good days, learning to do better, the friends and people you meet at the river and lake are all part of it. That’s what he’s tried to capture with the book on his experiences over a whole year  fishing in New Zealand.”

The second paragraph in Sargent’s review “As with most angling authors he hopes his book will also raise awareness of how wonderful it is to have healthy rivers and build support for keeping them that way.”  which is what the Advocates for The Tongariro River are about. Maybe there is a Father Christmas and he will deliver this gem to me.

A  little niggle, actually it’s quite a scratch.

The clean up of the Willows and new planting along the Waiotaka  by iwi from Rongomai Marae has been applauded by observers of the work done on this river. It is therefore disappointing to observe that some people have taken advantage of the improved access to dump rubbish there. I have noticed the same disappointing behaviour on the left bank of the Tongariro river. It causes me to again congratulate Dave (Didymo) Cade for his constant efforts in keeping all the rivers flowing into Lake Taipo clean and tidy. His nylon fish is growing into the size of the monster trout that is dreamed about. A pity it is made from discarded nylon.

On a more positive note is the pleasure of the walk along the town bank from Taupahi Reserve to the Swing bridge. The Tuis, their song,  noise and numbers make this a wonderful experience. My photo doesn’t do justice but it may give some sense of the beauty of nature. 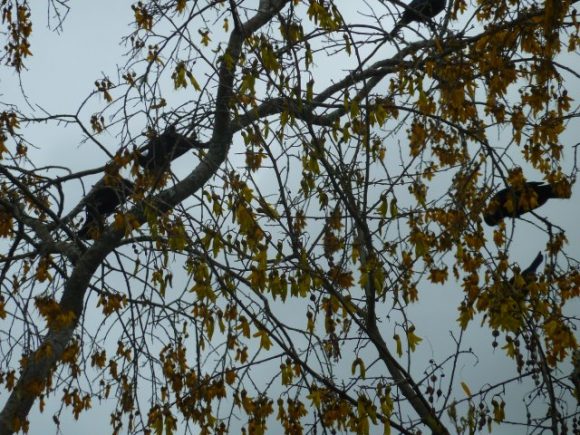 The following graph shows the flow rate for the month.